EMPRESS PUBLICATIONS
Clicking on the book cover will take you to Amazon, where the books are available in various formats.

Linda Litteral is a survivor of incest and rape who used art to heal from the destruction to the body and spirit which comes from physical and sexual abuse. In this courageous memoir, Litteral shares the story of her abuse, spanning eight years of incest perpetrated by her grandfather, a rape she experienced in high school, and physical and verbal violence she suffered at the hands of her first husband. She offers an in-depth psychological profile of the effects of abuse, including silence, shame, invisibility, powerlessness, guilt, and difficulties with trust and identity. She also illustrates how the body remembers abuse through symptomatology like dissociation, anxiety, chronic illness, and other post-traumatic stress responses.

Yet Litteral has done more than survive her past—she’s found a way to thrive in the present. She generously catalogs all the healing modalities she has experienced in her decades of undoing the destruction of her past, including talk therapy, meditation, yoga, breathwork, Tai Chi, and somatic-based therapies like acupuncture, EMDR, sacral cranial therapy, and Thought Field Therapy. But it’s when Litteral discovers the power of creating and sharing her art that her healing journey begins in earnest. Accompanied by rich full-color images of her art in every chapter, Litteral shares stories about the creation of her pieces, their stunning symbology, and how they aided in her healing journey. Litteral is both an artist and an activist, a fierce champion for survivors, and an unabashed advocate for the healing power of art.

OTHER BOOKS IN PRINT 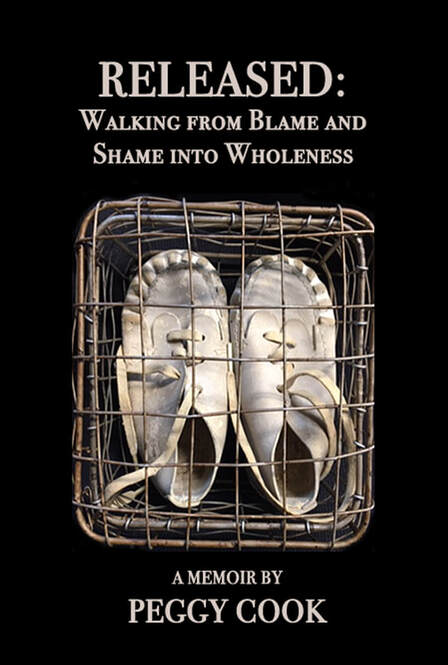 In the 1950s, Peggy Cook came into the world with bilateral clubfeet, feet that are twisted and facing each other, necessitating that a person walk on the sides of the feet or on tiptoe. In addition, the heel chords are short, and tight which also affects balance and gait. Surgery was available in her childhood to correct the deformity and potential disability. But Peggy also came into the world with a family who practiced Christian Science, and a father who worked for The Mother Church his whole career. The family focused on spiritual healing and prayer in lieu of medical interventions. As a child, Peggy blamed herself for not being able to pray well enough for her condition to be healed. She experienced the shame that comes with feeling not faithful enough or spiritual enough to see that clubfeet are “unreal,” the church’s word for deformity or sickness of any kind. Walking became increasingly painful, without the needed surgery or any pain relief.

Peggy began her journey of transformation, releasing her trust in spiritual healing and replacing it with her decision to rely on medical science. In her late thirties she had surgery to correct her clubfeet.

This memoir chronicles her journey from indoctrination to individuation and offers hope that it’s never too late to rebuild a life and experience joy and freedom in a way that acknowledges one’s agency.

The Scrapbooks of the Soul Series by Marilyn Hammond

Scrapbooks of the Soul is a series of four novels asking big questions about being alive. The stories are about hermeneutic habits, our habits of interpretation. These novels tell how we humans interpret ourselves, others, and all of life.

The word hermeneutic is from the name Hermes in Greek mythology. Hermes had the complex task of delivering the messages of the gods to mortals, which meant he first had to interpret for himself what the gods were saying, and then translate the message in such a way that mortals could understand.

The four novels show that humans have the same complex task as Hermes. We are hermeneuts whether or not we want to be, for in the ordinariness of life, we always and everywhere infer, deduce, discern, and decide, what our experiences “mean” or if they mean nothing, which is itself an interpretation.